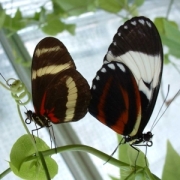 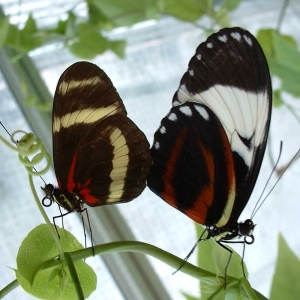 Color pattern mimicry and mating behavior are deeply intertwined in Heliconius butterflies. Previously we showed that Heliconius mate assortatively based on color pattern and that male mate preference is genetically linked to a major Mendelian locus that shifts wing color between white and yellow. Recently we used genome-wide association mapping, gene expression analyses, and genome editing with CRISPR/Cas9 to show that the gene aristaless1 controls the critical white/yellow mimicry locus that butterflies use as a cue during mating. Our work also showed that the derived white allele originated in one species and was subsequently passed to another by hybridization. We continue to pursue the question of how mate preference is generated and what causes preference variation to be linked to the color switch locus. Related to this work, we have invested substantial effort into developing genome editing approaches in Heliconius and other butterflies, studying the impact of female mate preference in Heliconius, and we have also participated in a number of large comparative surveys aimed at tracking the amount and evolutionary consequence of introgression among Heliconius species.

Behaviour before beauty: signal weighting during mate selection in the butterfly Papilio polytes

Does male preference play a role in maintaining female limited polymorphism in a Batesian mimetic butterfly?