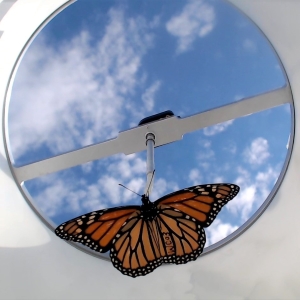 A monarch butterfly tethered in our monarch flight simulator.

The monarch butterfly, Danaus plexippus, is famous for its spectacular annual migration across North America, recent worldwide dispersal, and orange warning coloration. Despite decades of study and broad public interest, we know little about the genetic basis of these hallmark traits. Recently, by sequencing and analyzing 101 Danaus genomes from around the globe, we uncovered the history of the monarch’s evolutionary origin and global dispersal, characterized the genes and pathways associated with migratory behavior, and identified the discrete genetic basis of warning coloration. The results substantially changed our understanding of this classic system, showing, for instance, that D. plexippus was ancestrally migratory and dispersed out of North America to occupy its broad distribution. We found striking signatures of selection associated with suites of genes involved in neurogenesis, development, and metabolism but the strongest signatures of selection centered on flight muscle function, resulting in greater flight efficiency among migratory monarchs, and that variation in monarch warning coloration was controlled by a gene not previously implicated in insect pigmentation. We are now working to determine the precise environmental cues that trigger migratory behavior and genetically dissect the migratory syndrome – including behavior, physiology and morphology. This research is of particular importance now because monarch migration is currently experiencing a notable decline. Our work is documenting the evolutionary, genetic, and behavioral distinctiveness of North American monarchs and identifying the functional molecular basis of this amazing natural phenomenon.

The genetics of monarch butterfly migration and warning colouration