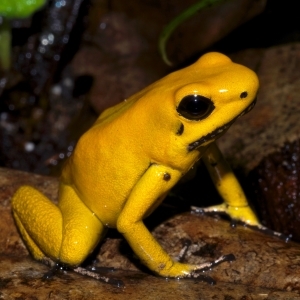 The incredible diversity of butterflies is also reflected in some vertebrate groups, such as poison dart frogs. Furthermore, as in butterflies, poison dart frogs show rapid diversification and convergence in color pattern. Roberto Márquez in the Kronforst Lab has established the poison dart frog genus Phyllobates as a focal system to study the evolution and genetics of color patterning in vertebrates. Phyllobates is remarkable for a number of reasons, including multiple independent origins of bright yellow coloration and extreme toxicity. One of these species, P. terribilis, is thought to be the most toxic animal on earth. Thankfully, poison dart frogs are not toxic when raised in captivity because their poison is derived from their diet. Our whole-genome analyses of populations and species within the genus have found that yellow warning coloration has evolved independently three times within the clade. In collaboration with Lauren O’Connell (Stanford), we are now developing genome editing and functional genomics tools in poison dart frogs which we will use to test the molecular genetic basis of their color pattern variation.

Divergence, gene flow and the origin of leapfrog geographic distributions: The history of color pattern variation in Phyllobates poison-dart frogs

Genomic takeover by transposable elements in the Strawberry poison frog