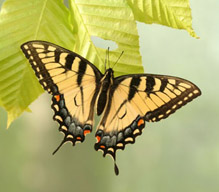 The recently described North American Papilio appalachiensis is suspected to be a hybrid species between Papilio glaucus and P. canadensis. It has a mix of morphological and phenological traits derived from its putative parental species. It shares its mimetic female form and some wing pattern elements with P. glaucus but most other traits with P. canadensis. We are using a variety of molecular genetic approaches to investigate the evolutionary history of P. appalachiensis and its relationships with P. glaucus and P. canadensis to determine whether it is a product of historical hybridization between the latter two species.

Genetics of mimicry in Papilio polytes

Genetics of mate preference in Heliconius
Scroll to top